En route to Iran (posts on that amazing country coming soon), I spent three nights in Istanbul.  I stayed at Vault Karaköy,  a terrific boutique hotel, a short walk and a world away from Sultanahmet. Think Brooklyn vs Manhattan or Left Bank vs Right,  albeit on a much smaller scale.  From my fifth floor room, I could in see the minarets on Sultanahmet in one direction while the Galata Tower loomed in the other.

I arrived in time for dinner with friends at Lokanta Maya, a deservedly popular restaurant just a few blocks from my hotel. The next morning, after a delicious Turkish breakfast,  I headed up the Golden Horn with Monica Fritz, a 20-year resident of Istanbul who specializes in photographic tours. Her company Alternative City Tours offers a wide variety of options for individuals and groups.   We took the ferry to  Ayvansary —  the scenic route and a good way to avoid crowded city streets.

This charming neighborhood is part of the Fatih district within the walled city. We visited Byzantine era churches from the time when Greeks resided here. All but one were converted into mosques: a personal decree by Mehmet the Conqueror in the 15th century preserved the Church of St. Mary of the Mongols.

We stopped in for coffee at Turkish Olympian Wrestler Necdet Uçar’s (in person in black below and in portrait with medal on wall)  favorite haunt. 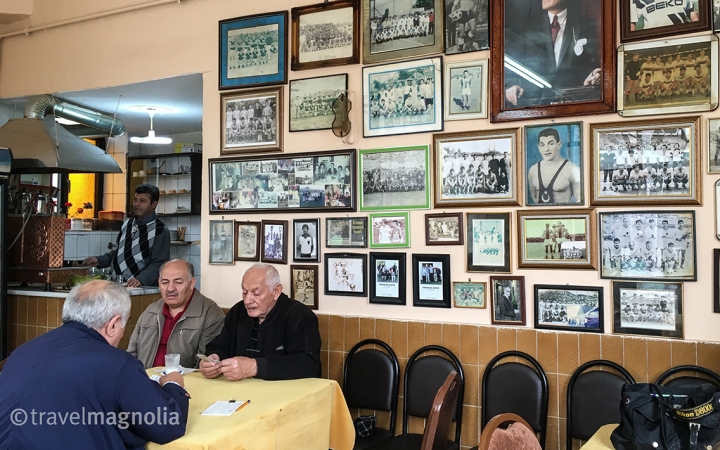 Then wandered the streets stopping to admire artisanal workshops and occasional art work.

We ended the day making our way through the Grand Bazaar and onto its rooftops for a fitting finale.