It is only fitting my final post on Iran feature Isfahan. After all, Isfahan is widely considered to be the most beautiful Iranian City, with an abundance of outstanding architecture, art and gardens. As an old Iranian proverb states:”Esfahān nesf-e- jahān ast” (Isfahan is half of the world). 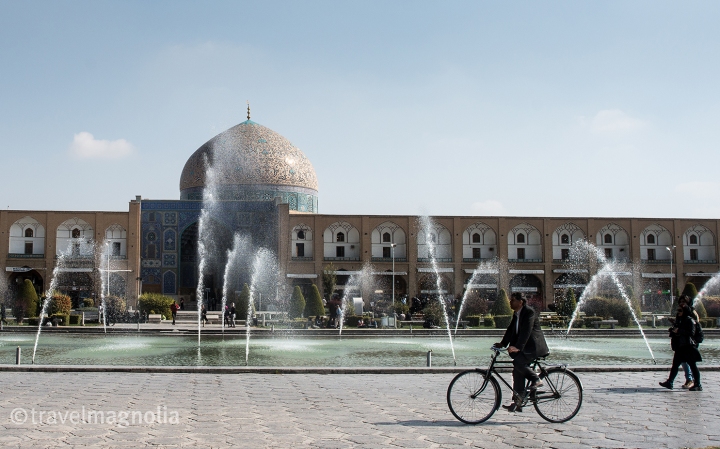 At the heart of Isfahan lies Naqsh-e Jahan Square,  a place that has beguiled residents and visitors alike since its construction in the early 17th century CE and another of Iran’s 19 UNESCO World Heritage Sites.  Measuring 160 metres (520 ft) wide by 560 metres (1,840 ft) long, it is Isfahan’s religious, commercial and social center.

Each side of the Square contains a jewel of Safavid architecture. We started with Sheik Lotfollah Mosque constructed in 1603-1617 as a private chapel for the Imperial family.

Immediately across the Square, the seven-story Ali Qapu Palace  was a popular place for entertaining and is particularly known for the remarkable Music room on the seventh floor. 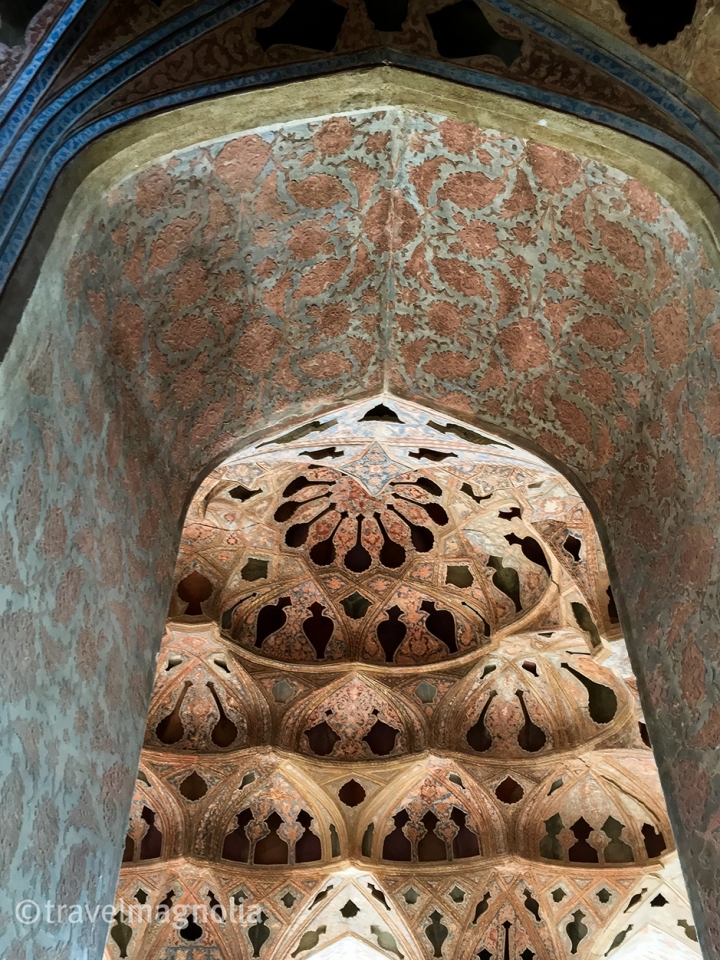 These musical instrument shaped niches were were aesthetically pleasing to the eye and the ear, as they enhanced the hall’s acoustics. At the north end of the square, the Shah Mosque is a monument to the vision of Shah Abbas I, who died shortly before its completion.

The elaborate tile work, carving and inscriptions are breathtakingly beautiful and a testimony to the incredible craftsmanship of this era.

The interior courtyards are tranquil refuges from the busy city, except during Friday prayers, of course.

A few blocks away,  Chehel Sotoun (Forty Columns) Palace  is another oasis. The gardens are part of the nine Persian Gardens collectively registered as a UNESCO World Heritage site. The roof was waterproofed by applying a fresh layer of beaten egg every year, and great effort is being expended to prevent its collapse from that weight. 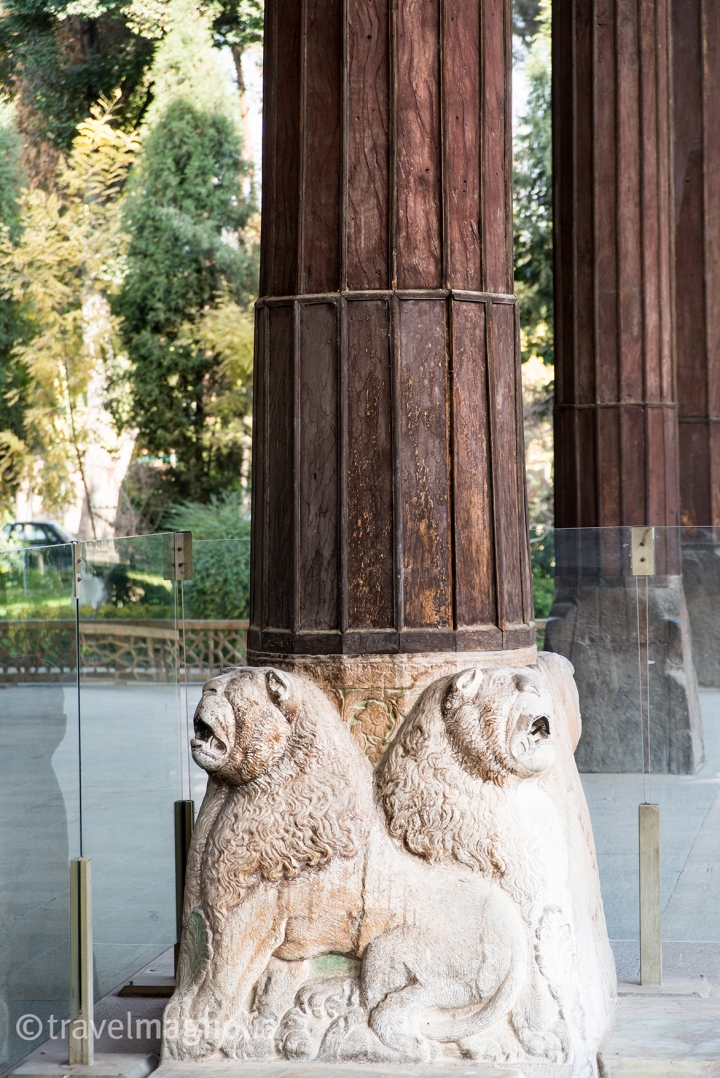 There are twenty wooden columns whose mirrored reflection in the adjacent pool gave rise to the name.  The lions at their base reminded me of their counterparts at Persepolis – then and even now – symbols of strength and royalty.

Chehel Sotoun Palace contains exquisite frescoes depicting famous battle scenes. In the one above, it is easy to spot  Shah Ismail I, founder of the Safavid Empire, on his white horse with its distinctive henna decoration.

One of the oldest mosques in Iran, the Jameh Mosque (above)  was under almost continuous construction from 771 CE to the 20th century. The tile work is less ornate, but no less beautiful than that in the Shah Mosque. The difference between their styles is analagous and contemporaneous to the Romanesque and Gothic cathedrals in Western Europe. A fun fact: the urn in the center foreground was used to serve Sherbet (yes, you read that correctly). Sherbert (derived from the Arabic “Shariba” meaning “to drink”) is a refreshing beverage made from an herbal or floral extract, sugar syrup and water.

Please excuse the reflections in the above image. A scale model of the Jameh Mosque, it provides an excellent overview of the Four-Iwan (open room) architectural style that originated in Iran and is widely used throughout the Islamic world.

Jameh Mosque’s north and south domes were constructed under the Seljuks in the 11th century CE with simple yet elegant geometric brickwork design. 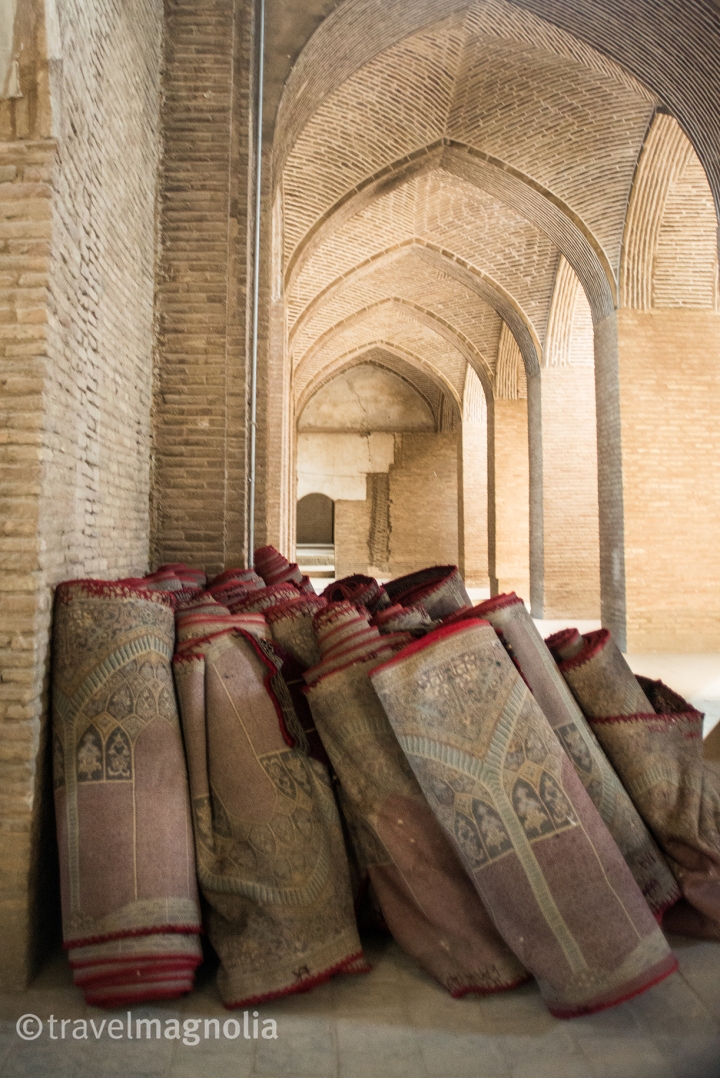 While the 13th century CE  stuccoed mihrab shown below is an incredibly ornate yet equally beautiful work of art.

Early in his reighn, Shah Abbas I set up a colony of Armenian Christians across the Zayandeh river and provided them with special protections and rights.

The Armenian community still worships at Vank Cathedral and there are a total of 14 churches in this quarter, named New Jolfa after the town from which they came.

The cathedral dates from the early 17th century CE and provides an interesting counterpoint to the Shah Mosque and the Sheik Loftallah Mosques.

Exquisite buildings, stunning calligraphy, mosaics, frescoes and history notwithstanding, the highlight of Iran for me is the people.

I hope these posts on Iran will inspire those who have not yet visited Iran to do so in the near future.