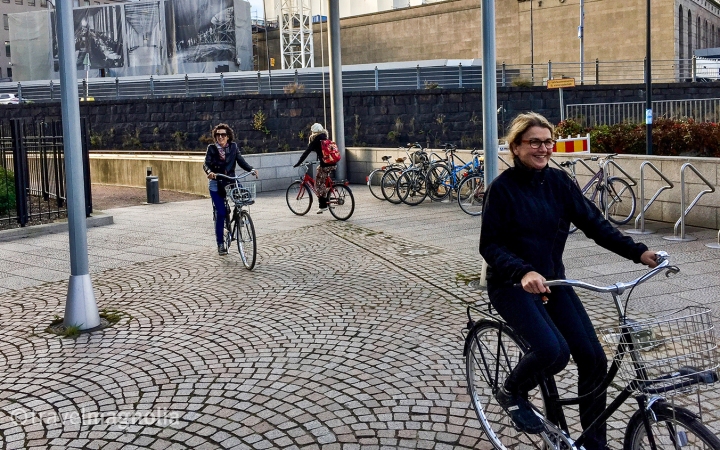 Helsinki may be the most-bike friendly city on earth (or in the universe as far as we know)! This was my second visit there and while it was brief (not even 24 hours), it was action packed. We arrived from Tallinn (36 Hours in Tallinn, Estonia) via hdyrofoil in a quick 90 minutes.  After rolling our suitcases to the elegant Hotel Kamp (where Justin Bieber was also staying that night – cue screaming teeny boppers outside our windows), we jumped on bikes for a five hour tour with our Finnish friend Tuire  (photo credit Jim Hunt).Bike paths extend throughout the greater metropolitan area and many people take advantage of them to commute ten miles or more.

Our first destination was lunch at Töölönranta alongside beautiful Töölö bay.  Once fortified with food and coffee, it was back on the bikes to explore the city.

My first exposure to Finland and its remarkable design aesthetic came via Marimekko fabric, Fiskars scissors and Iittala glass, well before Nokia and Angry Birds hit the scene.  Finland is known for its prodigious musical (Jean Sibelius, Esa-Pekka Salonen, and more) and architectural talents as well, and on our way we passed two buildings that express both of these: Helsinki Music Centre  (foreground above) and Finlandia Hall (Arvo Aalto 1971).  Our timing did not allow us to attend a concert this trip, but we will be back!

The majestic central railway station was designed by Eliel Saarinen (father of Eero) and inaugurated in 1919. Many of his Art Nouveau (known as Jugend in Finland) buildings are prominent throughout Helsinki. The Eira, Katajanokka and Kruunuhaka neighborhoods are full of beautiful buildings from this period.

Our compressed schedule did not allow time to visit Suomenlinna, the mid-18th century fortress that is a UNESCO World Heritage Site.  However, I spent a wonderful day there on my previous visit and highly recommend allocating at least a few hours, if not longer. The ferry terminal is adjacent to the market square. 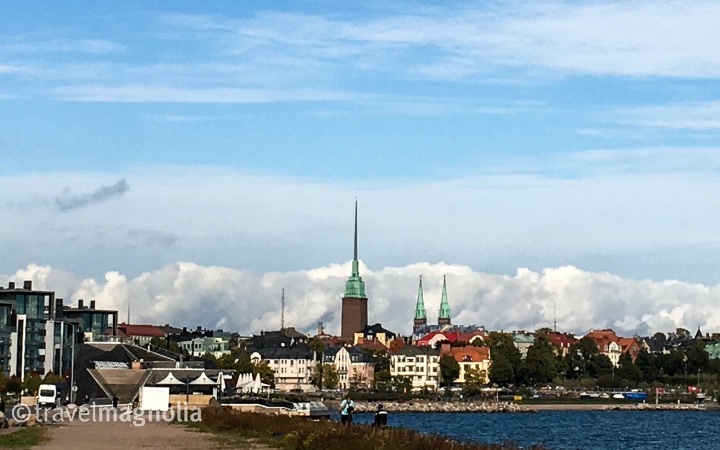 A few more kilometers and time for coffee and a cinnamon bun on the deck at Café Carusel (in foreground above).

Our day ended with dinner at Restaurant Saari , a terrific traditional Finnish restaurant on a small island in the harbor. Open only May 1 – September 30, we were lucky to be there just before it closed for the winter. 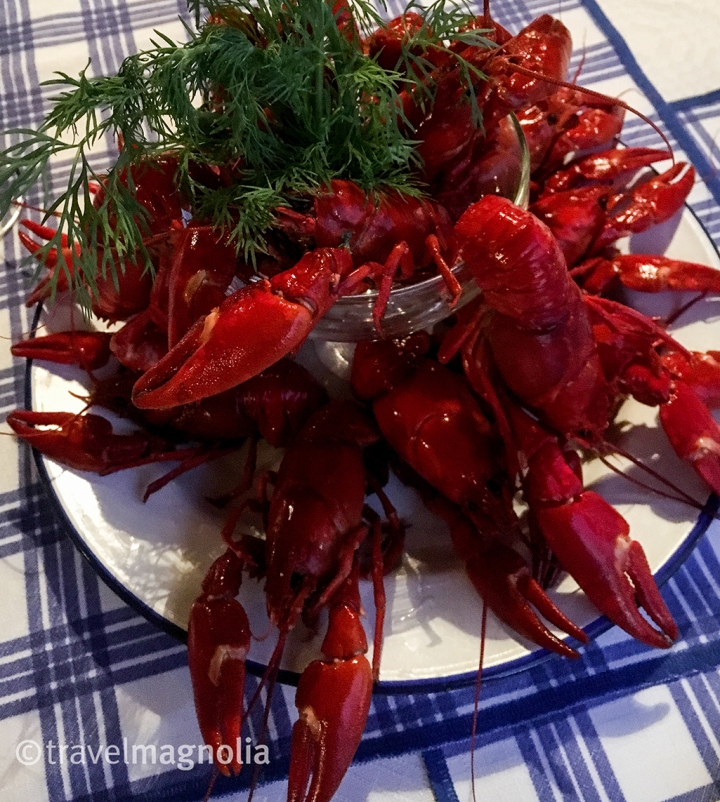 We indulged ourselves with platters of local crayfish, gravlax and Finnish cheese and finished our meal with Saari’s famous pine tar ice cream. Yes, you read that right. I had to try it but only once!

I can’t wait for my next trip to Finland. I would like to spend more time in Helsinki as well as venturing further afield.